The majority of us don’t live in Beverly Hills, so it’s understandable that we install what we can afford when it comes to our siding. However, in the eyes of top construction contractors, this explains the unfavorable trend of hardboard siding that can be seen on homes everywhere that were built new over the past few decades. While this product still has the appearance of real wood and several homeowners who use it have dodged the bullet thus far when it comes to water damage, today’s generation of contractors are receiving a growing number of calls about aging hardboard siding that has fallen victim to rain or water damage, swelling and patches of deterioration. 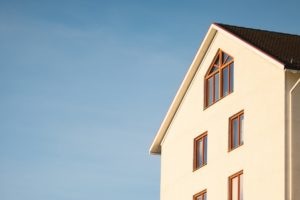 The good news? Good contractors. They can make the process of siding selection, repair, or replacement far less daunting—even enjoyable. They understand what modern materials and woods are affordable and best resistant to water. They can adeptly handle your siding complaints, communicate with your insurance, and quickly restore your home’s precious coat of armor.

As siding options are growing—from time-tested woods to newer, modern-day-engineered materials—smart homeowners can explore products that not only look better, but offer greater protection, equity and coverage from insurance. Simply put, there’s an option that can be tailored in the interests of your home and your wallet.

In the storm-prone Midwest, it’s important to remember that when it comes to siding, never just go skin deep—you could be inviting water into your home years later. Hardboard siding may have a nice-looking shell, but underneath you’ll find heat-compressed wood fibers, wax and resin, which require more maintenance down the road and offer less performance than other brands. Ask any professional.

Whether you’ve incurred siding damage or you’re looking to upgrade to a better option or receive consultation, you can always call a certified contractor serving homes in Omaha, Papillion, La Vista and Bellevue since 1987. 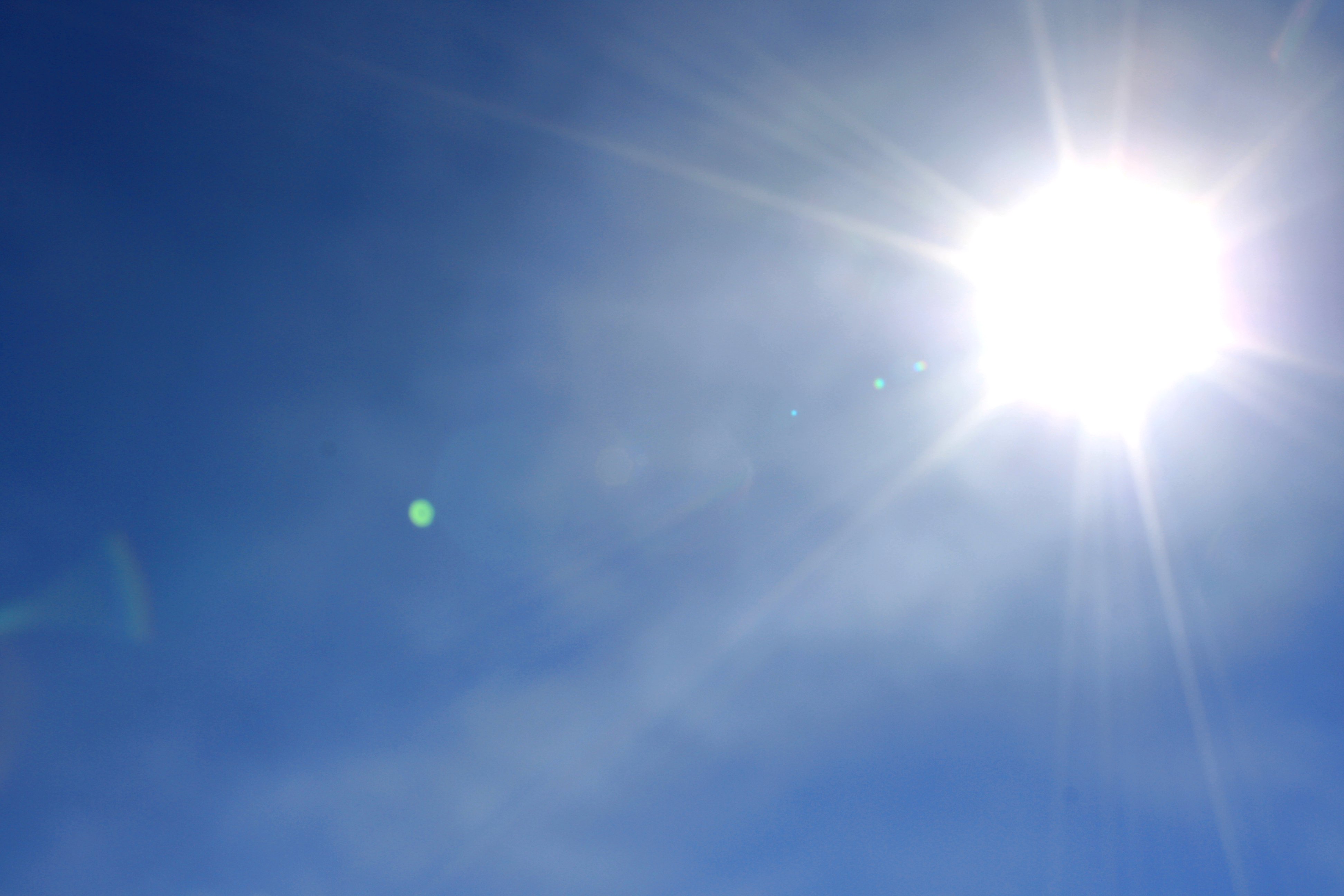 Winter is receding and the summer sun is teasing its way in. Now’s a perfect time to prepare your home with a few simple steps to maximize your comfort and minimize any issues this season.

Check your home’s exterior. Now’s the time to see how your home handled the winter and preemptively address any needs before spring storms and summer swelter begin their annual barrage. Are there any shingles missing from the roof? Are there loose boards in the siding? Gaps in the windows? Torn or bent screens or any cracking in the foundation? Points where the snow leaked into the home? These are all things that can be promptly solved by a professional contractor before the problem grows more intense along with the weather.

Make sure your attic is properly ventilated. An attic that’s properly ventilated by professionals ensures that undue heat is never trapped in your home (poorly ventilated attics can reach 150ºF in the summer) while also preventing unwanted moisture. When moisture builds, it can form into mildew and molds on your infrastructure—which can sometimes become a health hazard. So let your attic breathe. The benefits may surprise you.

Get your HVAC system checked. Make sure you’re prepared when you revive the AC for another season of cooling. Professionals can check your unit to ensure it’s running correctly, locate any leaks and tune it to run most efficiently.

Test all of your outside electrical outlets. Are they working correctly? Again, a professional contractor can assist if you locate a dud, which may indicate a greater problem.

Know your market. It’s wise to be prepared. With the seasonal changes on the horizon, be sure to have a trusted contractor on hand in the event of a problem or emergency. You can ask your home insurance provider for a list of trustworthy names. But above all, look for someone who receives local awards and real testimonials indicating overall excellence and customer service.

A well prepared home decreases the likelihood of issues during the hot months, but more importantly, enables you to more easily enjoy the summer. After all, isn’t that the point?

If you have further questions on de-winterizing your home, or for anything home-related, call Total Construction any time to speak with a friendly representative.

Anyone who leaves town for a few days knows the simple joy of returning to home sweet home. But for one woman, it was much sweeter.

Sue V., an Omaha resident who single-handedly raised seven kids in her home, found an opportunity to finance a quick weekend trip to visit two of her sons living out of state. She’d leave Friday, return Sunday. Simple.

But not so simple, given what she knew.

Sue knew that, amidst her priorities of being a good and ever-present mother, she’d still be returning to the same deteriorating home, the same holes in her siding, and the same foundational issues. She knew that her home was falling fast into disrepair, despite recently emptying her retirement in efforts to maintain it. She knew that times were becoming tighter and money harder to come across.

But she didn’t know this: As soon as her plane left the runway at Eppley Airfield, her close friend Joyce from her church and Total Construction CEO, Kevin Jackson, marched a small cavalry onto her property to fix her house. It was a secret operation involving contract workers, construction equipment, good friends and volunteers of all ages, working dawn till dusk to restore a home to a condition as pristine as the heart of its owner. 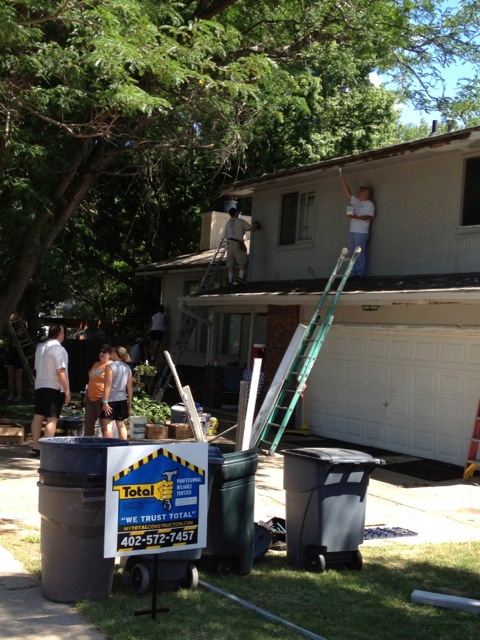 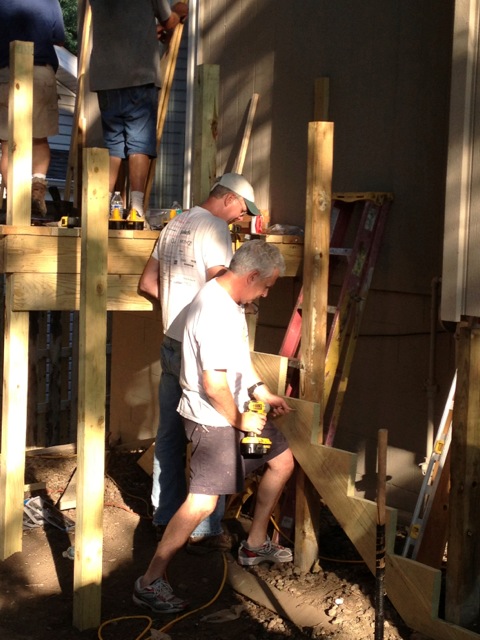 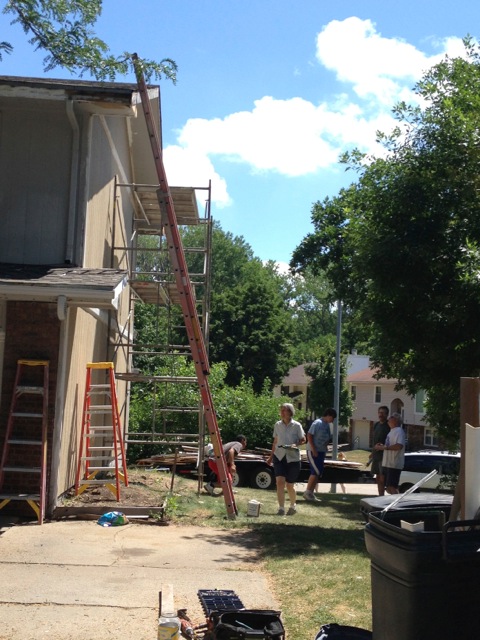 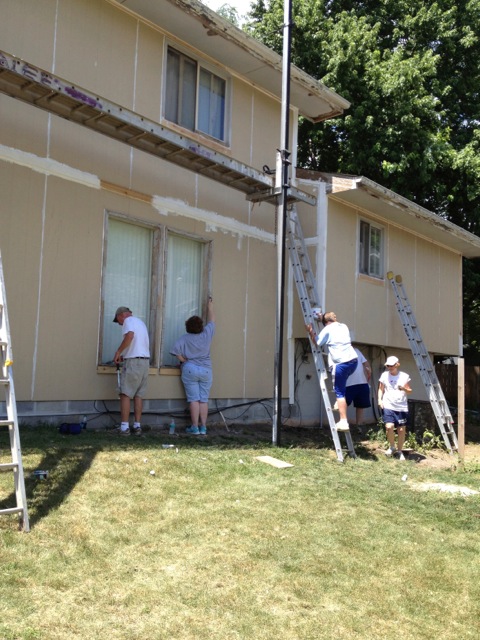 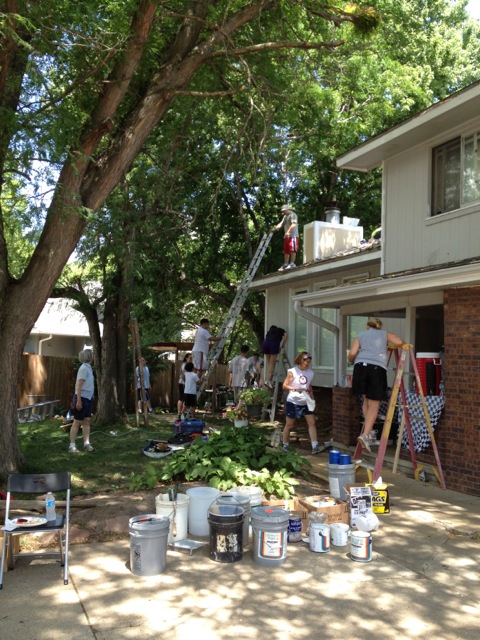 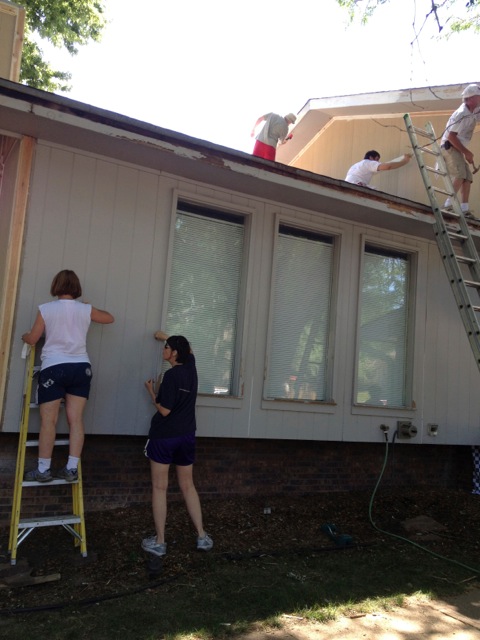 Part of the project was fundraised among friends. But most of it was just old-fashioned volunteerism and hard work—much the case for Jackson, who donated time to the project despite it being the busiest, most demanding time of year for contractors.

The home’s foundation was repaired. Siding was restored and painted. Grounds were repaved. Qualified workers performed major professional operations while others ran caulk guns where needed. Fences were rebuilt among other things. Home was, for Sue, sweet again.

Sue arrived home late Sunday night when the darkness served like wrapping paper hiding the gift from plain sight—until her daughter reached in and turned on the porch light.

“At first I thought it was the wrong house.” Sue said. “I’ve never had a deck before.” Her friends had been waiting underneath the newly built deck in the meantime with flashlights.

“They surprised me and took me around the house. It was a miracle.”

Her astonishment continued well beyond that evening. “For well over a month every single day I walked around the house to witness it. I am so grateful.”

On a September evening shortly thereafter, Sue hosted a party to thank everyone who had helped. After all: that night, there was no home across the city that was better suited for such an occasion.